I decided to implement a perfect AI (using Minimax) for Tic-tac-toe. I had not decided though whether I’d use JavaScript or Racket, two languages I’ve been using quite a bit recently and about which I am quite interested. As the post title gives off, I’ve decided to write a functional programming solution using Racket. It is open-source and available on GitHub. See the repository. There is also a fairly decent GUI-based game that allows you to play against the AI. 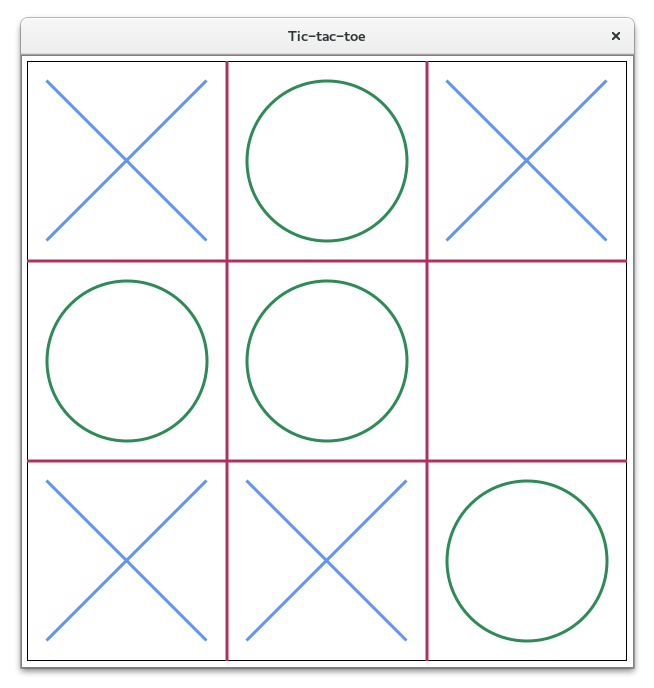 When writing this I decided to use vectors instead of lists, expecting it would give me better performance. However, it is quite slow. Even though the current implementation is good enough for real-time gameplay, it could be much more efficient for such a simple decision tree as the one used in Tic-tac-toe. Maybe using lists would have been a better choice as some parts of the application now have to convert vectors to lists. Additionally, slicing and merging vectors seem to generate a lot of work for the garbage collector. Finally, as the biggest vector holds only nine elements, the constant-time random access vectors provide is likely not making too much of a difference.

Being an automation enthusiast myself. This project also got its amount of continuous integration and delivery. Every push and pull request is built and tested by Travis CI. Here you can find the build history of the project. Travis also prepares and deploys a Linux-only standalone distribution to GitHub releases on tags. See the releases page. In the future I may make Windows and Mac OS X standalone distributions available. You should be able to play the standalone game on Linux even without having Racket installed.

There is also alpha-beta pruning left to be implemented, which should also significantly improve performance. Even though this is still a work in progress, the game works and the AI is indeed perfect. It also runs in any operating system as long as it has a Racket 6 distribution installed.